Javelina Jundred would be my best shot at a Western States qualifier this year. I had tickets in the lottery the 3 previous years, so I did not want to lose those chances! If I could not run a qualifier, then I would have to start from scratch the following year! I began weight bearing on my right leg status post fracture of tibia/fibula and hardware including a plate, wire, and 11 screws in late February. My goals of Vermont and Tahoe 200 were not to be realized, so I chose Javelina due to the date (allowing maximum recovery time) and the hopefully, forgiving terrain. I had to gamble on the heat since the previous year was a scorcher, but this would be my 2014 goal.

My ankle and right lower leg looked like a chicken leg with maximum atrophy, but I worked hard to regain strength and stay determined. Mileage was limited for several months due to discomfort and limited range of motion, but MI Titanium Iron Distance Triathlon training would be my cross training and endurance base. Biking was going well until I crashed when my brakes locked up and I fractured my tooth root and ripped off the right half of my face. Unknowingly, I also severely bruised my right femoral medial condyle which forced no running for 6 weeks. The Iron Distance race was a success with no run training, but I have to admit that a marathon distance without run training was not easy. :-)

So, now my focus would be to balance increased mileage to complete a 100 while not re-injuring my knee, ankle, or other part of my body!!!! I completed a long run of 40 miles 4 weeks prior to the 100 and hoped that would be enough!

Javelina would be part of our family vacation and my awesome crew of my three girls and husband would be there to provide support and encouragement. Watching the forecast in Fountain Hills gradually heat up was a bit scary. My first 100 mile race was in heat and I suffered in a bad way. The conditions were out of my control, so I would make efforts to prepare for the heat and develop strategies to keep my body temperature under control.

We arrived in Arizona on Thursday and explored the area. It was HOT! Friday morning we arrived at Javelina Jeadquarters to claim our tent site. It was HOT! The girls were already suffering from the heat and direct sun at 8 a.m.! We headed down to Casa Grande to explore and meet Sam, Jason's cousin, for some supplies (cooler, chairs, sleeping bags). Thanks, Sam! I started to feel sick with a headache...not a good sign. I tried not to worry...I needed to rest. We headed back to the hotel and I went to bed. I woke to pick up my packet and then back to bed! Jason took the girls to the Jalloween party in Fountain Hills. (Thank to you the great community of Fountain Hills who welcomed the runners' families to join their celebration!) I completed my drop bag preps, ate a bit, and then back to bed!!!!

I woke at 3 am Saturday morning and the headache was gone. The first couple steps after I got out of bed were painfree and no limping (usually it takes a while for my joints to loosen up these days). All of these were good signs. Jason drove me to race and watched as I squeezed into a mass of runners as we headed out into the desert to start the race. He then went back to let the girls enjoy the pool and relax. As sun went down they would head over to cheer me on and Jason would pace the last 3 loops.

The first loop felt great. The sunrise was beautiful and despite over 500 runners, the trail didn't seem overly crowded. The first loop was too fast for much of the field, including myself. It felt effortless enough as I chatted with other runners and compared goals, injuries and such. It would heat up quickly and then I would be forced to slow down, so I didn't worry. The second loop felt warm, but I felt like I was tolerating it well until my left calf seized up...for no good reason? I had never had this happen and it did scare me a little. I walked some and then tried to run through it and it did eventually go away, then came back an hour later, and then I guess it just decided to chill out!

I was not looking forward to loop three which would be the hottest loop of the day. I slowed my pace and decided to just get through and it would get cooler. I could feel the hills on this loop and walked a little more. On the the downhill rocky section, I went down hard hitting my right ASIS (front of hip/pelvis) directly on a sharp rock. That hurt! It took my breath and make me nauseous. I sat for a few minutes and two nice guys lifted me up on my feet. They walked with me for several minutes until I felt like I could run. Thank you so much to these two!!!! So, I kept moving. My hip was sore and bruised, but I could run gingerly so it must not be broken....ahh, that would just stink! I was having trouble taking in calories at this point due to the heat and and nausea, but was looking forward to the sun going down.

Loop four was fairly uneventful. I was concentrating on my footing as the sun was going down and looking forward to seeing Jason and the girls. Finally, I was there and my awesome crew was waiting and developing their strategy to help me out! Jason was ready to go! Alexandra and Jillian (13 and 10) would take turns staying awake. This was totally their idea. I told them to try to sleep and set an alarm for 4 hours. They were so excited and ready to help. Lap 5 was tough. We hiked the hill and started to attempt a little running when Jason nearly stepped on a rattlesnake!!! The rattlesnake seemed to taunt us. It did not rattle, but it was in no hurry to slither off of the trail and into the desert floor cover. I was not doing well and so glad that Jason was with me. I'm not sure if I would have had the reflexes to hop over that fella! I felt like I wanted to puke and even tried, but nothing. I decided to sit at the next aid station halfway through the loop and try to drink soup broth and pull it together, somehow. That seemed to help and we were able to run (well kindof) much of the second half of the loop.

Jillian was ready and wide awake to greet us as we completed the 5th loop. Meghann (7 years old) was sound asleep from her busy day swimming and Alexandra was asleep, as well. We gave Jillian a big hug and were off on loop 6. It was the middle of the night and fatigue was setting in. We could hear coyotes howling on both sides of the trail as if they were discussing the unusual notion of humans running around in circles on their land. Now, just as I hoped for the sun to go down, there is something about a new day and daylight that is also comforting. I knew that the chance of a 24 hour finish was not a possibility at that point, so I reset my goal to just finish. It seemed that my body forgot how to run. I would try to pick up my legs, but the movement felt very uncoordinated with little forward progress and it just seemed more energy efficient to walk. We arrived the Jeadquarters. The sun was not quite up. Alexandra was awake and so was Jillian. They were ready to help, but I told them that I was hurting and just needed to get back out to finish the final loop. Meghann was still asleep! (That cot must have been comfy!)

So, we were off. We hiked alot. The 3 1/2 mile hill that I easily ran on the first loop seemed like a mountain. There was no way I could run that now. So, we finally made it to the spot where the trail was runnable..the last 3.5 miles. Jason told me that if I could run at least 15 minute miles, then I could break 27 hours. I told him that I didn't care and that there is no way. At that point, I got a little angry with myself and then I just willed myself to run, to pick up my daggone legs and run! And, it worked. I was running. I was running 12 minute or under pace and wondered how long I could do that. I just kept thinking that I wanted to be done and see my girls. I passed several runners on that last loop and encouraged them to push to break 27. I was on my last half mile and was still running. The girls were waiting and ran through the finish with me in 26:48.

Jason and my daughters are always my inspiration to finish. I never want to let them down. So much of a 100 mile race is mental toughness and working through the low points in your head. This was certainly not my best performance, but I am proud and lucky to finish. I am so grateful to have a family who believes in me and to have awesome friends who were cheering me on from home. I have a body that is somewhat beat up, not genetically gifted, but I have a strong mind and I don't easily give up!

Thank you to the wonderful volunteers and Race Directors who provided a well organized, inspiring, and memorable event in the heart of the Sonoran Desert! 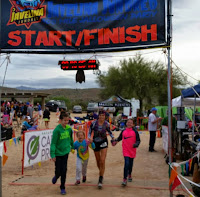 Relaxing, visiting family, and celebrating on our last day on Arizona!