Graveyard 100 went well and recovery was coming along, so the decision to run the inaugural Canal 100 was relatively easy. The race was close, inexpensive, and had forgiving terrain. It also fell into my "100 mile" theme that I created to celebrate my year of turning 40. Mary Beth and I waited until a couple weeks before and signed up. We stayed with my Aunt the night before which worked out great since it was only about 20 minutes from the race start.
The evening before I felt really bloated and knew that it was quite possible that I would be running 100 miles at same time as my menstrual cycle emerged from it's greatness. So, in preparation for this added small inconvenience, I added some menstrual specific supplies to all of my drop bags.
We met up with our friends, Tina and Todd, at the race start. Tina would be running and Todd crewing/pacing. 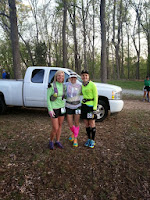 I could tell from the start that this day would be a struggle. I felt super bloated (5 pounds heavier), crampy, and kindof just "blah". I felt like I was doing ok and that the general field of runners were going out way too fast, as usual. We were keeping an even, controlled pace, chatting, and solving worldly problems. The day started to warm up quickly and layers were shed.

The aid stations were great and well stocked. I would not have needed anything really from my drop bag except for my unique supplies. So, as we pulled into the 25ish mile aid station, I immediately went to my drop bag first. There were many crew and spectators at this particular juncture. I could see that I was being observed by several as I was trying to discreetly retrieve my personal items. It is always interesting what ultrarunners use to get through a 100 mile run and there were several on lookers who I believe were interested to see the special fuel that I was quick to pursue from my drop bag. So, I am pretty sure that they were disappointed in the result, especially the guys???? 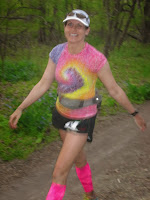 Mary Beth and I stayed together for the first half. Our husbands, friends, and my daughters would be at the half way point. It is always so great to know that someone who cares about you is waiting to assist and I was looking forward to seeing my family and friends this juncture. This race is unique and special in regards to pacing. They allowed bikes to pace after the first half. So, a quick kiss and shoe change at the 50, and then we were off. 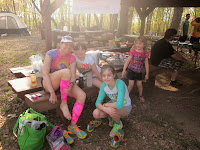 Jillian (AGE 8) was the first pacer on bike. She seemed to have a great time and smiled the entire ride. 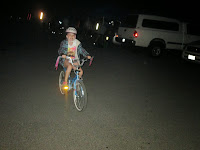 As it began to get dark, Alexandra (AGE 12) took over pacing duties with her head lamp! Our friend, Joe, joined us along this 20 mile stretch!!!! That was Alexandra's longest ride and she hung in there despite some seat discomfort! 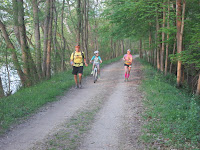 It was during this second half that I really felt crampy and needed very frequent breaks, just off the trail. I suggested that Mary Beth go ahead since I could not control my GI issues (which were primarily a result of the monthly thing) and it was causing me to become depleted. I knew that my sub 24 hours goal was probably not going to happen. But, I also knew that my entire family was there and that I would finish this race and keep pushing with whatever I had left. Jason took over pacing the last 30 miles on bike. I know that had to be so tough. It was cold, dark, and I was moving very slow in between stops on the side of trail! The miles crept by slowly. Daylight arrived. Where in world was that terrible hill with the rope that I would ascend for the final 1/2 mile? Finally, it was in sight. Joe had all three girls there to help me rally a tiny bit of strength remaining to make it to the finish line 24:15. So, I did not meet my goal, but I was just so happy to be finished and to be surrounded by the best family and friends ever!!!!!! So, that is the secret! The secret does not reside in the drop bag. The secret is knowing that there are three girls, a husband, and awesome friends who dedicated their weekend to helping you enjoy your passion!Some days you don't feel the greatest or have your best race, but those are the times when you dig deep and know that you will still persevere!
So, during circle time at pre-k on Monday morning, Meghann will have some great stories to tell!!!! 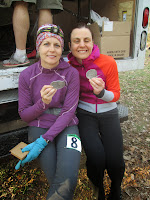 Congratulations to Mary Beth and Tina who both ran amazing races that day!


The girls entertain themselves as they wait! 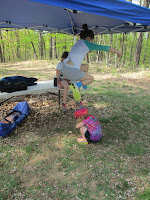 Jillian gives me advice around mile 80! 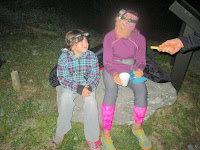 Meghann rides along for short jaunt! 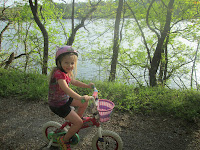 Mary Beth and Matt getting ready to head back out on the trail! 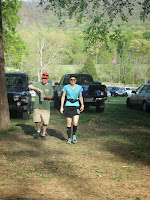 This crewing or whatever you call it is exhausting! WEll, maybe not for Jillian! 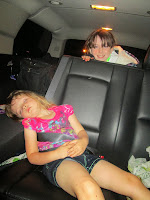 The girls meet with with less than a mile to go! Yes, I am pooped! 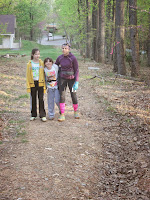 Meghann....because crew can just be cute to be supportive!!!! 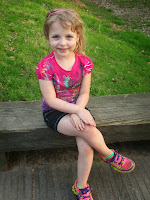 Jason was the photographer so there are no pictures of my biggest supporter, so I have to add one of my own! 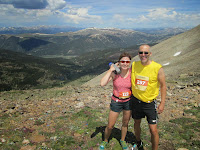